Our hymn for the month of October is #318 in the Gray Hymnal “We Would Be One.” It is loosely connected to the theme for October which is Democracy. It is one of two hymns in our hymnal that are sung to the tune of Finlandia.

This tune was composed for a Finnish symphonic poem by Jean Sibelius in 1900. It was associated with the patriotic movement to free Finland from Russia. “We Would Be One” was written by a Unitarian minister, Samuel Anthony Wright, in 1950. Reverend Wright had been appointed the Executive Director for Youth at the Continental Convention of 1953-54. At that conference, the youth of the U.S. and Canada merged to form the Liberal Religious Youth of U.S. and Canada, setting a model for the larger denominational merger in 1961.

This hymn is said to “encapsulate the hope and promise that a creative outlook can inspire…” It is considered inspiring, easy to sing and is included in the humanity section of our Hymnal. 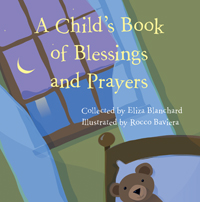 A Child's Book of Blessings and Prayers