Started by a group of dedicated couples and individuals, our small lay-led fellowship was incorporated as the Unitarian Fellowship of Pocatello (UFP) in about 1960. Boasting up to 40 members and an extremely active children’s religious education program, the Fellowship met in a number of Pocatello locations throughout the ’60s and into the ’70s.

After disbanding temporarily in the mid 1970’s due to declining membership, the Fellowship was reorganized in 1987. Members and friends met in each other’s homes during the rebuilding process. We moved to our current location, renting from First Congregational UCC on Garfield Avenue in 1989, where we started afternoon services followed by our popular potluck dinners.

The 1990s brought a number of significant changes, including a name change in 1999 to “Pocatello Unitarian Universalist Fellowship” (PUUF). Our membership count has hovered around 60 members since the mid-1990s.

PUUF entertained the idea of having a minister in the 1990s and was led by Rev. Kitsy Winthrop for a short while. Then we called the Rev. Louise Robeck from Delaware, as an Extension Minister in 1996. After the departure of Rev. Robeck in 1997, PUUF was again a lay-led fellowship for many years.

In 2010 we collaborated with South Valley Unitarian Universalist Society in Utah, and hired Consulting Minister Rev. Lora Brandis to help us improve our ministry and to prepare for eventually calling a minister.

In 2011 we hired another Consulting Minister, Rev. Susanne Marsh, in collaboration with the Magic Valley UU Fellowship. In 2012 we were once again lay led.

Jennifer “Jenny” Peek began serving as our minister in October of 2017. Reverend Jenny Peek was ordained by our Fellowship and is credentialed in preliminary fellowship with the Unitarian Universalist Association. 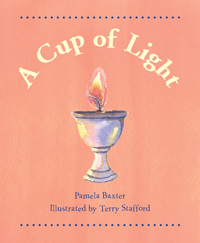 A Cup of Light
All About the Flaming Chalice